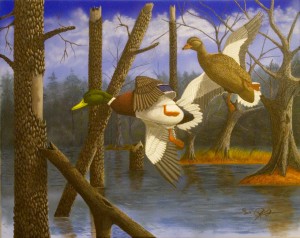 Back in November 2010, I began comtemplating what my next wildlife painting would be. I began doing my standard research by looking through all of my reference photographs trying to find the subject material for the painting. When I had gone through my existing photographs and did not find anything that really inspired me, I loaded up my camera equipment and my wife and headed out in the country to see what we could find.

Before we left home, I had used Google maps to locate some larger bodies of water in the county where we live and had found one particularly large lake that was not too far away. As we drove to our destination, it soon became apparent that the road leading to this particular lake was not a public road so we could not reach it.

However, not to be outdone, I decided to drive the a spot along the Little River where I had visited several years earlier. This particular area was a favorite fishing spot where my Father-in-law had fished about 40 years ago. As we arrived and turned off the main highway, my wife commented that this was the same spot where her dad had gotten his truck stuck in the mud while on one of his fishing trips. We had driven out there after dark and helped him get his truck out of the bog he was stuck in.

Off the highway, we took a two lane trail that followed along the river for probably two miles. We were so far back in the woods, the palmetto plants were higher than my pickup truck. My wife even jokingly said “I think I hear banjo music”. However, the trip turned out to be very much worth the effort. We came upon a spot way back in the middle of nowhere that was really breathtaking. There were old trees hidden back there that were unbelievably beautiful. There was one old cypress tree that had to have been 6 feet in diameter with roots that spread out for ten feet in all directions.

The colors of the foliage was gorgeous, especially where the trees reflected in the still waters of that hidden refuge. The browns of the trees against the deep blue of the sky was spectacular. The leaves on the trees reminded me of the mountains in late October and early November.

Though we didn’t actually find mallard ducks back there, we did see a belted kingfisher flying up stream that flew right in front of us. There were old trees standing in the water and some that had fallen over still leaning against the part of the tree they had fallen from.

Because the water was so still, the golden, red, and purple leaves that had fallen from the trees were floating gently on the water’s surface. The deep blue of the sky was reflected in the water as if a giant mirror had been laid flat on the ground.

Needles to say, I took nearly a hundred reference photographs for use in later paintings. The scene I chose for my latest painting, “Hidden Refuge”, was a section of the river that really seemed to fit with some reference photographs I had of a pair of mallard ducks I had been wanting to paint.

So we returned home and I sat down with my sketch pad and started drawing. After two days of sketching, I came up with the sketch for the painting. On day three, I stretched the canvas and went to work. And now on December 10, 2010 it’s finished and I hope you enjoy the scene as much as I enjoyed creating it. This painting represents only a small portion of the area that we visited but I plan to do more paintings from this gorgeous spot later to include the old cypress tree we found.

And now the process starts all over again. What will I paint next? Stay tuned and find out and as always, thanks for stopping by. If you want to see some of my other recent works, visit my Acrylic Paintings gallery at North Forty Wildlife Art.