How to Paint a Mallard Duck Wing

The underside of a mallard duck wing is made up of a series of small feathers that cover the main flight feathers and the secondary feathers of the upper side of the wing. I have created a method of painting these feather groups that greatly simplifies the process and looks realistic without having to paint each individual feather. The method involves some simple brush strokes that you’ll learn quickly with a little practice. 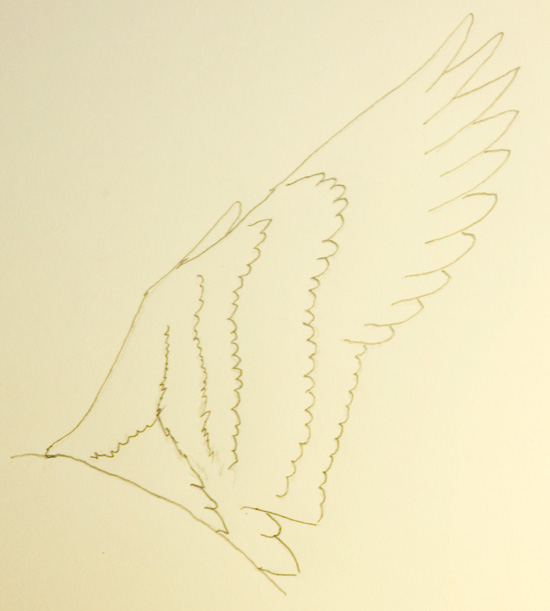 We’ll start out with the sketch of the wing as viewed from the underside. You’ll notice in the sketch that I’ve simply outlined the feather groupings that I want to paint and not the individual feathers. As you can see, there are essentially 5 feather groups we will be dealing with on this malard duck wing. 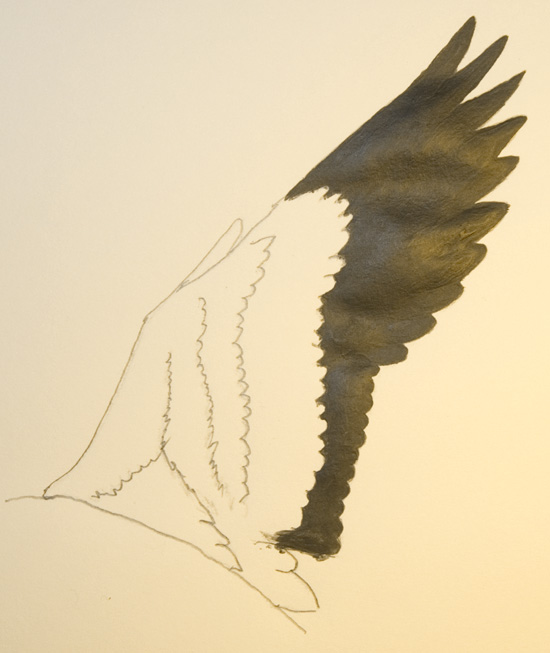 Flight feathers of the wing painted with the dark value

The first thing I do to begin painting the wing is mix a dark value of grey, which consist of a 1 to 1 mix of titanium white and ivory black. I then paint the entire flight-feather group with this dark value. I’m painting on lightweight paper for this exercise so you’ll notice some wrinkles and reflections in the photographs. 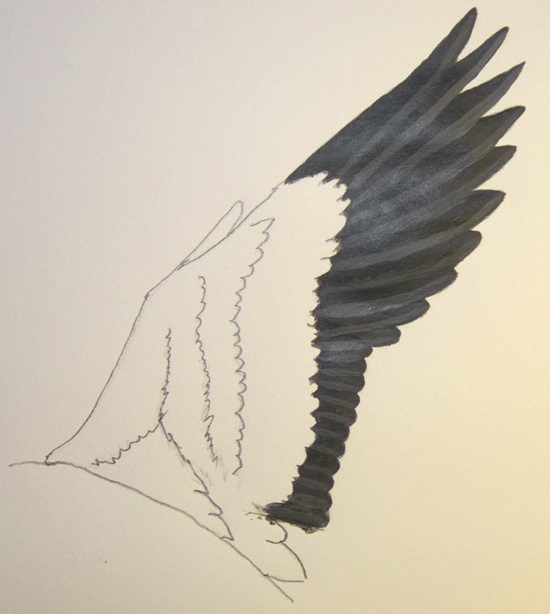 Flight feathers of the wing highlighted

After the dark value on the flight feathers has dried, I add a little titanium white to the dark value and create a mix that is slightly lighter in value. Using a flat brush about 1/8″ wide, start at the top of the wing and highlight the bottom edge of each feather in the group.

You’ll have to pay close attention to your reference photos to get the direction of the highlighting correct so the feather will look realistic. 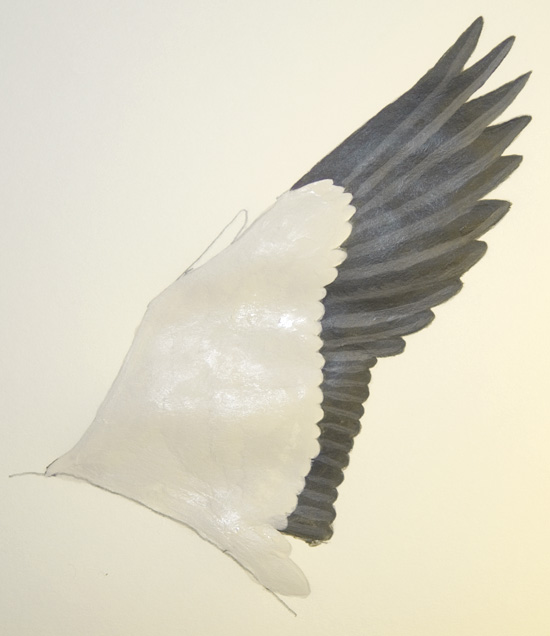 The next step in this process involves mixing a small amout of ivory black with a good amount of titanium white to get a very light grey color. Be very careful not to get this color too dark because this feather group is actually white and we want the shading effect to be very light.

I always paint all of the white groups with this grey color all at once to save time. However, until you’ve had some practice with this technique, you may want to paint each feather group individually by stopping at the boundary between groups. 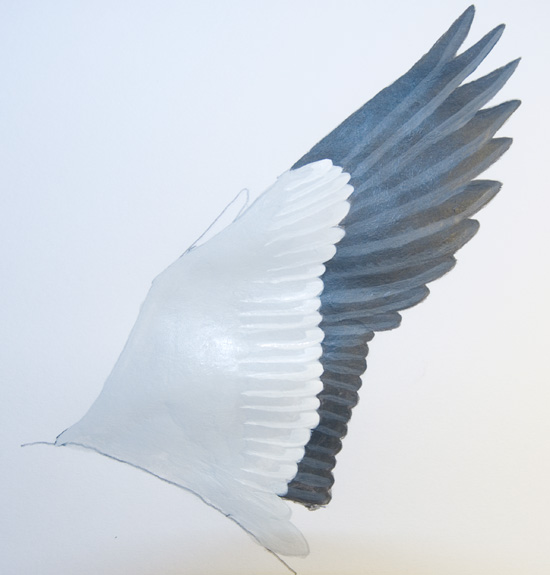 The wing with the first group of feathers highlighted

To begin highlighting each feather in this particular group, take pure titanium white and mix enough water to give the mix a consistency that is similar to half-and-half whipping cream. You want the paint to flow easily from the brush but not too thin.

Dip a flat 1/8″ sable brush in this mixture and then wipe some of the excess paint onto a clean spot on your palette. Now take the brush and start at the top of the wing and create a backward j shape that highlights the tip end and the bottom edge of each feather in this group. 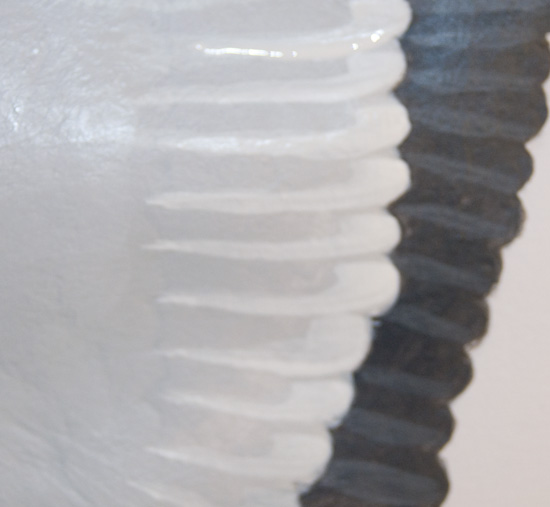 This image better illustrates the effect you’re trying to achieve. When creating this effect, leave a small space between each feather to give the illusuion of a shadow at the top of each feather.

You do this by starting the highlight effect just below the bottom edge of the feather above the one you are highlighting. You want to create this effect with a single brush stroke. 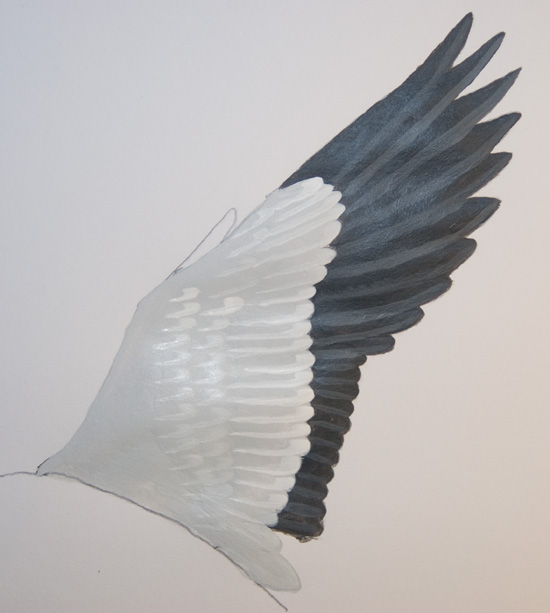 The wing with the 2nd and 3rd coverlet group highlighted 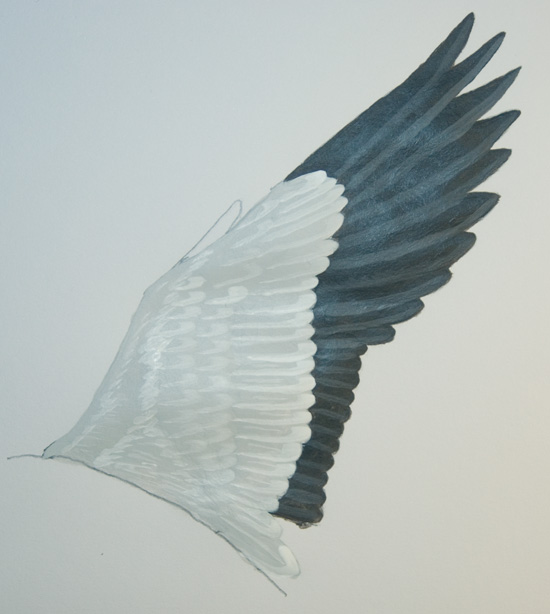 All of the wing coverlets highlighted

Now highlight the last feather group. This time we want to make very tiny brush stokes because the feathers in this group are very narrow. Highlight the two large feathers at the bottom of the wing near the body and you’re done with these feather groups. 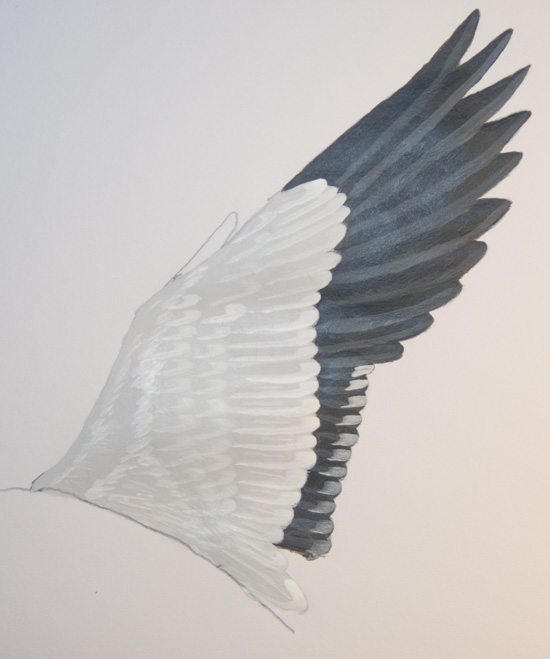 Now, using the same grey color you used as the dark value of the white feathers, highlight the ends of the secondary flight feathers. The tips of these feathers are actually white but are usually in shadow, so they will appear grey. 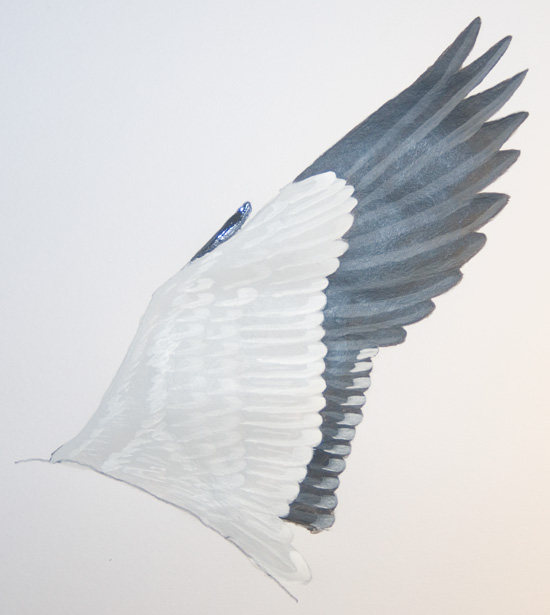 Image of the finished wing

Now paint in the single dark feather at the top of the wing and you’re done. To really make the wing look realistic, I usually go into the flight feathers, using my sky color, and paint in some separations in the barbs of the feathers.

I like to add some highlighting on the flight feathers to indicate where the stem of the feather is visible. A lot of tiny touches can be added to increase the realism of the wing, but don’t go too far as you can quickly over do it.

I hope you’ll get some paint and try your hand at painting a mallard duck wing now that you know the secret. Until next time, keep your brushes clean, your colors pure, and as always, thanks for stopping by the North Forty.

5 Responses to How to Paint a Mallard Duck Wing